Our next ISSA meeting will be Tuesday January 27 and will feature Rob Lee!  This free meeting is open to the public, so please share with your friends and security colleagues!


About Rob Lee
Rob Lee is an entrepreneur and consultant in the Washington, DC area, specializing in information security, incident response, and digital forensics. Rob is currently the curriculum lead and author for digital forensic and incident response training at the SANS Institute in addition to owning his own firm. Rob has more than 15 years of experience in computer forensics, vulnerability and exploit discovery, intrusion detection/prevention, and incident response.
Rob graduated from the U.S. Air Force Academy and served in the U.S. Air Force as a founding member of the 609th Information Warfare Squadron, the first U.S. military operational unit focused on information warfare. Later, he was a member of the Air Force Office of Special Investigations (AFOSI) where he led a team conducting computer crime investigations, incident response, and computer forensics. Prior to starting his own firm, he directly worked with a variety of government agencies in the law enforcement, U.S. Department of Defense, and intelligence communities as the technical lead for a vulnerability discovery and an exploit development team, lead for a cyber forensics branch, and lead for a computer forensic and security software development team. Rob was also a director for MANDIANT, a company focused on investigating advanced adversaries, such as the APT, for four years prior to starting his own business.
Rob co-authored the book Know Your Enemy, 2nd Edition. Rob earned his MBA from Georgetown University in Washington DC. He was awarded the Digital Forensic Examiner of the Year from the Forensic 4Cast Awards. Rob is an ardent blogger about computer forensics and incident response topics at the SANS Computer Forensic Blog. Rob is also a co-author of the MANDIANT threat intelligence report M-Trends: The Advanced Persistent Threat.


Registration
For more details and to register, please see:
http://augusta-issa-2015-q1-rob-lee.eventbrite.com/

The Technology Association of Georgia’s Infrastructure Society, the TAG Greater Augusta Chapter, and leaders from the technology community will join officials from the Army Cyber Command (ARCYBER) Headquarters in Fort Gordon, Georgia for a daylong conference at Georgia Regents University in Augusta entitled, “U.S. Army, Cyber Security and Business Against a Common Foe.”

Topics included in the panel discussion portion of the all-day conference include:


For more details and to register, please see:
https://www.123signup.com/event?id=yxvms

If you have any questions, please contact Heather Miner at TAG (heather@tagonline.org).
Posted by Doug Burks at 6:28 AM

Our next ISSA meeting will be Tuesday October 7 and will feature Bryce Galbraith!  This free meeting is open to the public, so please share with your friends and security colleagues!

About Bryce Galbraith
As a contributing author of the internationally bestselling book Hacking Exposed: Network Security Secrets & Solutions, Bryce helped bring the secret world of hacking out of the darkness and into the public eye. Bryce has held security positions at global ISPs and Fortune 500 companies, he was a member of Foundstone's renowned penetration testing team and served as a senior instructor and co-author of Foundstone's Ultimate Hacking: Hands-On course series. Bryce is currently the owner of Layered Security where he provides specialized vulnerability assessment and penetration testing services for clients. He teaches several of the SANS Institute's most popular courses and develops curriculum around current topics. He has taught the art of ethical hacking and countermeasures to thousands of IT professionals from a who's who of top companies, financial institutions, and government agencies around the globe. Bryce is an active member of several security-related organizations, he holds several security certifications and speaks at conferences around the world.

Registration
For more details and to register, please see:
http://augusta-issa-2014q4-bryce-galbraith.eventbrite.com/

If you missed BSides Augusta this past weekend, you can view the videos on the BSidesAugusta YouTube channel!

Thanks to all the speakers, sponsors, volunteers, and attendees who made this such a great event!
Posted by Doug Burks at 8:18 AM

Securing Your Kids from Cyber Criminals

SANS and FBI will be presenting "Securing the Kids from Cyber Criminals" at the Fort Gordon Signal Theater on 7 Oct 14 from 10AM to 12 noon. 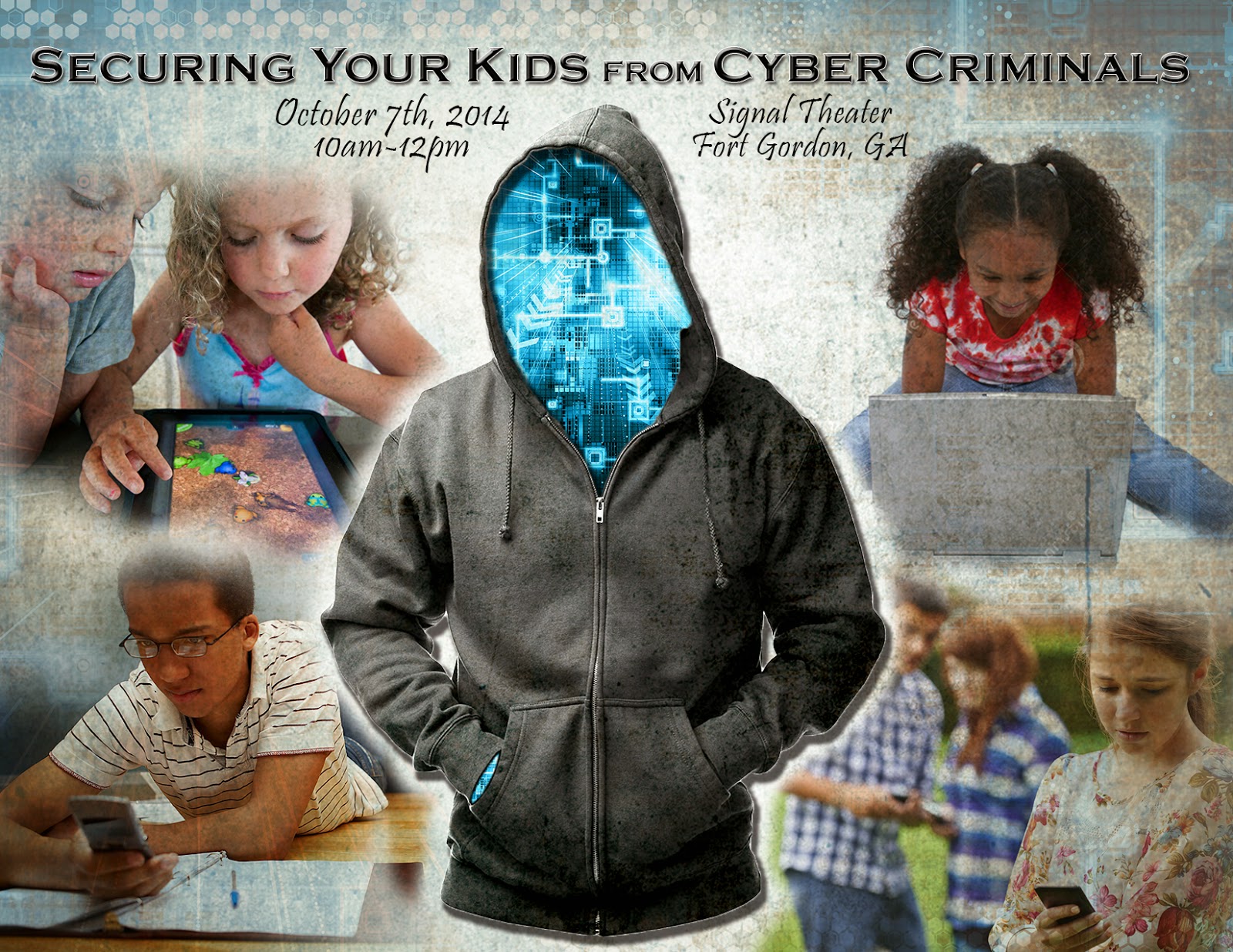 Business:  meeting was opened by Mark Baggett.  With approximately 20 members present we voted to sponsor Bsides Augusta up to $2000.00 for expenses.

Meeting was closed by Mark Baggett.
Posted by Doug Burks at 4:37 AM

Our next ISSA meeting will be Monday July 28 and will feature Alissa Torres!  This free meeting is open to the public, so please share with your friends and security colleagues!  We will also be conducting official chapter business, so if you're an official ISSA member, please make every effort to attend.

About Alissa Torres
Alissa Torres is a certified SANS instructor, specializing in advanced computer forensics and incident response. Her industry experience includes serving in the trenches as part of the Mandiant Computer Incident Response Team (MCIRT) as an incident handler and working on an internal security team as a digital forensic investigator. She has extensive experience in information security, spanning government, academic, and corporate environments and holds a Bachelors degree from University of Virginia and a Masters from University of Maryland in Information Technology. Alissa has taught as an instructor at the Defense Cyber Investigations Training Academy (DCITA), delivering incident response and network basics to security professionals entering the forensics community. She has presented at various industry conferences and numerous B-Sides events. In addition to being a GIAC Certified Forensic Analyst (GCFA), she holds the GCFE, GPEN, CISSP, EnCE, CFCE, MCT and CTT+.

Registration
For more details and to register, please see:
https://greateraugustaissa20140728.eventbrite.com

Our next ISSA meeting will be Thursday July 3 and will feature our very own Mark Baggett!  This free meeting is open to the public, so please share with your friends and security colleagues.  We will also be conducting official chapter business, so if you're an official ISSA member, please make every effort to attend.

Bio
Mark Baggett is the owner of Indepth Defense, an independent consulting firm that offers incident response and penetration testing services. He has served in a variety of roles from software developer to Chief Information Security Officer. Mark is the author of SANS Python for Penetration testers course (SEC573) and the pyWars gaming environment. Mark teaches several classes in SANS Penetration Testing curriculum including SEC504 (Incident Handing), SEC560 (Penetration Testing) and his Python course. Mark is very active in the information security community. Mark is the founding president of The Greater Augusta ISSA (Information Systems Security Association) chapter which has been extremely successful in bringing networking and educational opportunities to Augusta Information Technology workers. As part of the Pauldotcom Team, Mark generates blog content for the "pauldotcom.com" podcast . In January 2011, Mark assumed a new role as the Technical Advisor to the DoD for SANS. Today he assists various government branches in the development of information security training programs.

Registration
For more details and to register, please see:
https://greateraugustaissa20140703.eventbrite.com/

We've partnered with the Atlanta ISSA chapter to offer a CISSP Prep Workshop to our members!  Details have been sent to the members mailing list.  If you're not already a member of the Greater Augusta ISSA, you can join today (http://augusta.issa.org/p/membership.html) and request details about the CISSP Prep Workshop.

Meeting in May featuring John Strand

Our next ISSA meeting will be Tuesday May 6 and will feature John Strand!  This free meeting is open to the public, so please share with your friends and security colleagues!

How to Fail at a Pen Test
In this presentation, John will cover some key components that many penetration tests lack, including why it is important to get caught, why it is important to learn from real attackers and how to gain access to organizations without sending a single exploit.   Additionally, John will show you how to bypass "all powerful" white listing applications that are often touted as an impenetrable defense.

When not teaching for SANS, John co-hosts PaulDotCom Security Weekly, the world's largest computer security podcast. He is also the owner of Black Hills Information Security, specializing in penetration testing and security architecture services. He has presented for the FBI, NASA, the NSA, and at DefCon. In his spare time he writes loud rock music and makes various futile attempts at fly-fishing.

Registration
For more details and to register, please see:
http://augustaissa2014may.eventbrite.com
Posted by Doug Burks at 6:27 AM